Evidence suggests that early humans frequented Brown Canyon. Petroglyphs attributed to the Hohokam people can be found in the canyon and near its mouth. Today this is the land of the Tohono O'odham. Father Kino noted Baboquivari's castle-like tower on a trip in 1699. Ranching began in the canyon in the 1870's and it is named for its earliest known rancher, Rollin C. Brown. A succession of ranchers and landowners ended in 1995 when the U.S. Fish and Wildlife Service purchased most of Brown Canyon from a group of landowners determined to ensure its preservation.

The structures that existed at the time of acquisition have become part of the refuge facilities. Especially notable is the Brown Canyon Environmental Education Center lodge. Here the Friends of Buenos Aires NWR host their outdoor education programs.

The Baboquivari Mountains are the western-most of the sky island mountain ranges in southern Arizona. Their elevation and relative isolation from other similar mountainous areas by intervening by lower elevation desert areas give them ecosystems with distinctive species.

The Baboquivari Mountains. separate the Altar Valley to the east from the great expanse of Sonoran Desert to the west. They are composed of three different named ranges: the Quinlan Mountains. with Kitt Peak, the Pazo Verde Mountains. at the Mexican border and the intervening Baboquivari Mountains that culminate at Baboquivari Peak. Brown Canyon along with Thomas Canyon drain the eastern flanks of Baboquivari Peak. As the canyon floor narrows it quickly transitions from desert scrub to sycamore-lined riparian gallery with Madrean oak woodlands on the higher slopes and upper reaches of the canyon.

The biological diversity of the Brown Canyon area is remarkable. Although ranching occurred in the canyon since the 1870's, its ruggedness minimized the impact. Since it was sold to the Refuge in 1996 its wildness has gradually increased. The last turkey disappeared over 50 years ago and their return in 2010 was cause for celebration. The puma has always occupied the rugged highlands and foraged the foothills for prey. Their numbers have been increasing in recent years. The wildlife is always a delight for visitors to see during the daylight hours, but an early morning walk on the dusty road reveals creatures and dramas that fire the imagination 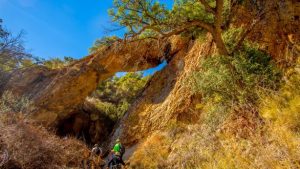 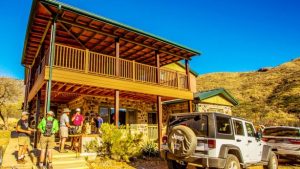